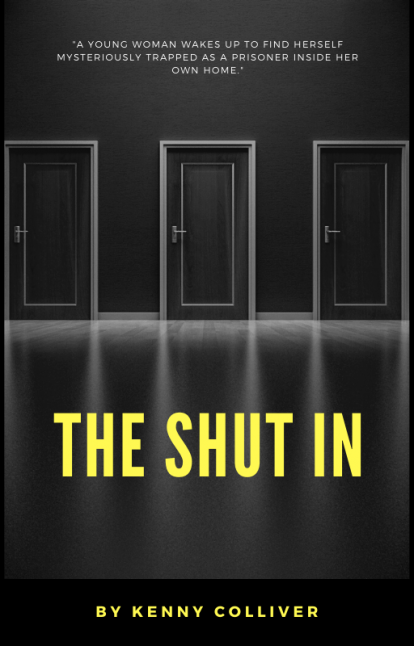 Projects
Ken Colliver
The Shut In

A young woman named Lilly wakes up in her living room, unable to recall the events of the previous night she had with her boyfriend Darren. After seeing that all of her furniture and belongings have gone missing; leaving her with nothing but a simple briefcase. She then discovers that all of the doors and windows of her house have been mysteriously boarded shut, much to Lilly’s shock and horror. This leaves her trapped alone, a prisoner in her own home. She soon starts discovering clues left inside each room of the house that lead her find the combination to the briefcase. After much trial, error and frustration she finally finds all three numbers of the combination and opens the case to find a key inside. It fails to open the front door, but Lilly successfully uses it to open her padlocked bedroom. She finds her bedroom empty, only containing a pile of her clothes and the only open window in the house. Having no other means of getting out of the house, Lilly ties all of the clothes together into a rope and uses it climb out of the window and down the side of the house. Unfortunately, the rope doesn’t hold and breaks, she injures herself after falling to the ground. Lilly sees the lights in her garage on and just barely manages to drag herself towards it; only to be greeted by Darren. He congratulates her for finding her way out the house; before drugging her as she tries to escape. The story ends with the rooms of the house reset to how it was during the beginning of the film, as a different woman wakes up in the living with the briefcase, unable to remember what happened the night before; as Darren watches through a hidden camera, timing her progress.

There are no updates yet.

We appreciate every single voice. Share the link to the selected by you project's page among friends and help the author to obtain the required number of votes.

If you want to act as an investor of the project(s) by investing a significant amount toward the cine-book production budget, please contact us.

A traditional audiobook that you can LISTEN to.

A traditional audiobook that you can LISTEN to.

A story that you can READ as a sequence of photos, with or without text, that form a certain storyline.

A story that you can READ and WATCH as a photo-realistic motion slideshow with animations, video inserts and video special effects.

А book that you can READ as a regular e-book with cinematic photo-illustrations on each page, LISTEN to as an audiobook, and WATCH as a photo-realistic static slideshow.

А book that you can READ as a regular e-book with cinematic photo-illustrations on each page, LISTEN to as audiobook, and WATCH as a photo-realistic motion slideshow with animations and video special effects.

A traditional film based on a book-to-film screenplay adaptation.

A traditional film based on a book-to-film screenplay adaptation.

Use the code below to embed this card in your website or blog - just copy and paste the code:

Enter up to 10 coma-separated email addresses:

A pledge without a reward

We do not store your credit card data on our database or server. This data is used only for the transaction.

PROMOTE YOUR PRODUCTS AMONG THE CINEMATIC REQUISITE OF THE CINE-BOOK

We do not store your credit card data on our database or server. This data is used only for the transaction.